An online discussion yesterday and today, sparked by a tweet from the Eddie Stobart  haulage company about naming its lorries, has hurled some nearly-six-year-old memories into the front of my consciousness.  When LB died, his given name was known only to a few people.  For all of us out in virtual space who knew him through his mother’s mydaftlife blog, he was Laughing Boy, LB. Somewhere on there I had seen a mention that LB’s actual surname was that of a rare bird, so when a week later the obits column in the Oxford Mail mentioned “SPARROWHAWK Connor: Died unexpectedly on 4th July aged 18” I was pretty sure that was LB; and the following day, an article in the paper confirmed it with a piece on the opening of his inquest: “Mr. Sparrowhawk was found unconscious in a bath”.

Back then, apart from those two Oxford Mail pieces, Google only returned a couple of hits for ‘Connor Sparrowhawk’.  One was this lovely clip of LB, recognisable from the glimpses in the blog photos, wearing funky psychedelic wellies and a workmanlike cap, driving a ride-on lawnmower.

The other was a comment from Connor himself (now, sadly, archived and no longer accessible online) on the Carlisle News and Star‘s online obituary of Eddie Stobart Jnr.

By the time the #JusticeforLB 107 days campaign got going in 2014, many people knew how devoted Connor was to Eddie Stobart. Connor’s love of lorries has been a recurring theme ever since.  We still collect Eddie truck names on motorway trips, and since the news came out last year that the Eddie Stobart marque might be at risk of disappearing from our roads, owing to a trademarking  dispute, I’ve been tweeting our gleanings  with the hashtag #GatherYeEddiesWhileYeMay.  We’re  far from being the only ones for whom Eddie Stobart lorries mean ‘Connor’. There are hundreds, maybe even thousands, of people whose first thought, on seeing the iconic green and red livery, is of LB.

So when @EddieStobartCom posted this tweet yesterday, there were a good many replies suggesting ‘Connor Sparrowhawk’ and ‘Laughing Boy’. 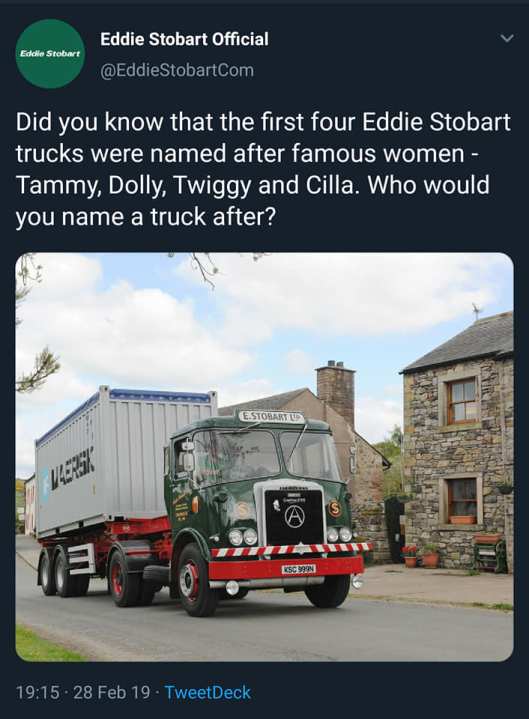 Unfortunately, as yesterday’s tweet suggests and the Stobart Club website confirms, Stobart lorries only carry girls’ forenames; preferably a pair of them, to ensure a maximum of unique name combinations. Neither boys’ names, nor surnames, nor nicknames are accepted. During the 2014 #JusticeforLB campaign, one of Connor’s aunts tried to get a Stobart lorry named after Connor, but because of the rules, the nearest she could get was putting his sister’s name forward instead.

Rodgers Coaches and Earthline Ltd stepped up and named three buses and a heavy haulage truck respectively for LB, and I’m still looking out (fruitlessly so far) for an Eddie named Rosie Bluebell, but I wonder, five years and a huge amount of Connor-related publicity later, whether the Eddie Stobart Company would consider breaking its rules, just once, and using a male name or a nickname to dub a tractor unit either Connor Sparrowhawk or Laughing Boy.

It would be a fitting tribute to the firm’s No. 1 fan, not least because he always, repeatedly, questioned the reasoning behind rules, to the point where his siblings were driven to capitulation (“I don’t know why, Connor!”) and his aunt begged him to ‘turn off his Y-box’.

But if rules are rules and a pair of girls’ forenames are the only acceptable format, maybe, half a decade after they were originally approached about Connor, the Stobart company could fast-track Elle Bea?

Think about it, eh?