For Connor’s family,
heads held high, keeping their dignity
in the face of attempts to shitestorm it away from them.

and for George Julian, still magnificently live-tweeting,
on the @LBInquest timeline,
everything you can read below.

11.05  Coroner: During the course of the inquest it has come to light that there was an earlier death at STATT in 2006 <<< instructs them on it.  It’s believed Patient A had a seizure while in the bath. Paramedics attended and attempted to resuscitate him but were unsuccessful.  The death was deemed natural. Cause of death 1a) convulsion with asphyxiation due to 1b) malnutrition, and a contributing cause 2) depression.  Coroner explains limited information available and is informing the jury of what known.

11.08  LS: I’ve been a consultant since 1999 and I’m medical director at @Southern_NHSFT.  I wld like to express my condolences and those of @Southern_NHSFT to Connor’s family for their terrible loss.  I am extremely sorry that Connor died in preventable circumstances whilst in the care of the Trust @Southern_NHSFT.  A tragedy such as Connor’s death can not be allowed to happen again.

11.22  Coroner directs @StevensLesley @Southern_NHSFT to read from her statement on how Trust currently manages care of pts with epilepsy.

11.23  LS: Not all of the @Southern_NHSFT guidance, tools and working templates had been implemented when LB was admitted to STATT in March 2013.  All professional staff would be expected to use their clinical training, experience and qualifications to guide competent practice.  During 2011/12 @Southern_NHSFT had undertaken its own review of all available evidence-based practice, guidance and research on epilepsy.  As result of review a document entitled ‘Epilepsy in Ppl w a Learning Disability Map’ was produced @Southern_NHSFT.

11.26  LS describes @Southern_NHSFT epilepsy map and toolkit.  Much of documentation is in the form of templates which are intended to be completed by nursing staff as they provide care to patient.  Guidance and training is given to staff which enables them to use the templates within the toolkit.  the most relevant template for the purpose of this @LBInquest is perhaps the ‘Epilepsy Risk Assessment’.

11.31  PB questions LS: She was only in post as LD and MH Director from July 2013 to July 2015, now Medical Director?  [Y]  PB discusses the ‘lengthy takeover’ of Ridgeway; will ask @StevensLesley about investigations, @CareQualityComm inspection.

11.33  PB: review of all patients with LD and epilepsy occurred before QC inspection?
LS: Yes.
PB: But they found a patient without a care plan
LS unsure, PB will return to it. PB describes CQC inspection process and LS agrees it. 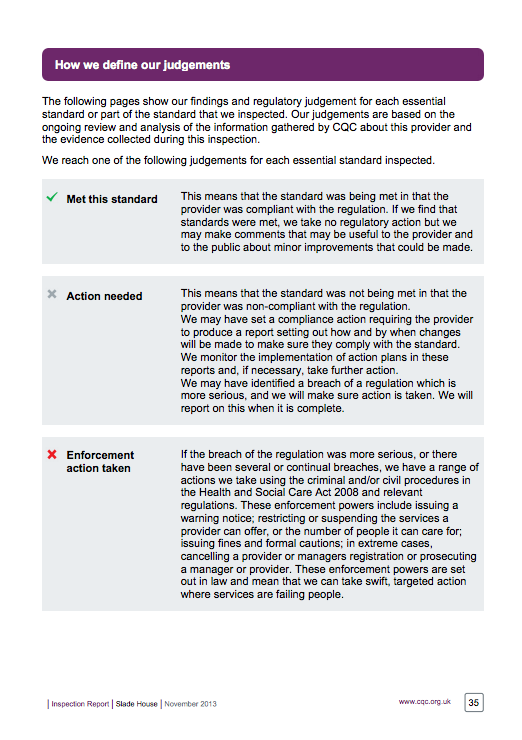 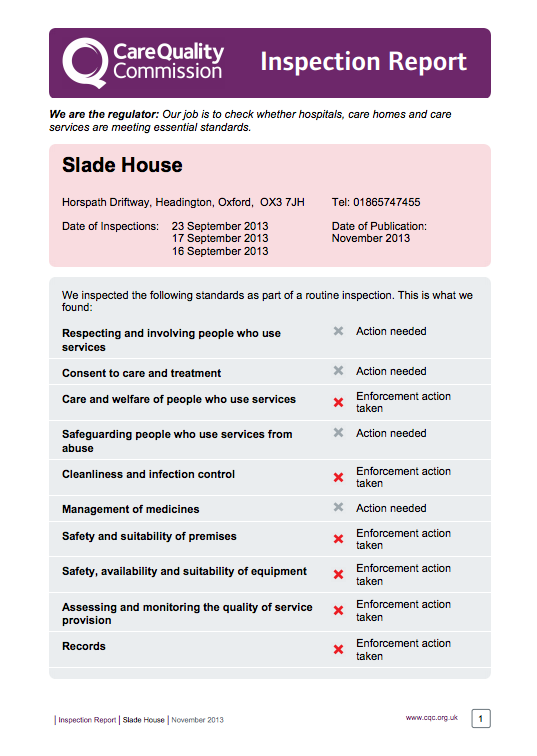 11.37  PB puts @CareQualityComm findings to LS who confirms them all.

11.38  PB: Those findings were after LB died, we’ve asked members of staff who were there & apart from being traumatised they agreed was much same.  LS: It’s hard to know for sure, it’s clear standards were not what they shd have been when Connor died.  PB: You’ve been hearing litany of chaotic systems and record-keeping and failures to protect patients broadly reflected in these findings.  LS: They are… the CQC point out a marked difference between the 2 units inspected and given level of concern raised about STATT seems to be some specific issues in the way STATT was functioning.  PB @paulebowen asks LS @stevenslesley to clarify and she reads this paragraph from the @CareQualityComm report:

11.42  PB: Jury have heard yr evidence and it’s accepted you’ve taken steps to improve things but jury need to focus on situation at time?  LS: Yes.  PB: Verita report found very limited staff training in epilepsy and that’s one of findings you accept?  LS: Yes.  PB: The epilepsy map and toolkit had been available in @Southern_NHSFT since Nov 2012 hadn’t it but hadn’t reached STATT?  LS: Yes.  And you accept that care planning at STATT @Southern_NHSFT might have been different?  LS: Well we can’t be sure but wld imagine so.  We’ve been hearing throughout @LBInquest about fundamental basic common sense and nursing care.  Nursing someone with epilepsy requires precautions around bathing.   We had an epilepsy specialist nurse who could have been called on.  PB: We’ve heard a succession of doctors and nurses who accepted information was not gathered.

11.46  PB: It’s your evidence that LB should not have been left for 15mins in the bath with a door locked?  LS: I completely agree.  The risk assessment tools that were available to staff…. and provided instruction to gather an assessment, were available.  The epilepsy toolkit is a gold standard resource, it’s not a nationally available tool.

11.48  PB: Let’s talk about why those standards weren’t there.  LS: OK.  PB: A key Verita conclusion was no clinical leadership from Dr Murphy and Jonny Cowee, that is evidence you accept?  LS: Yes.  PB: We’ve also heard about a flattened hierarchy?  LS: We’ve not heard where that management instruction came from.  There’s been steady culture change that supports idea ppl w mental health and learning disabilities don’t do well in purely medical care.  We’ve heard because everyone was treated equally and no-one took responsibility… as a consultant I’m clinically accountable.  Consultants are clinically accountable for patients in their care, it doesn’t mean the doctor is god in our services or shd run every mtg. The buck stops somewhere and we’ve heard no-one is clear where the buck stops.  PB: So who was the person who had overall responsibility for the care of Connor Sparrowhawk?  LS: In my view the consultant [Dr Murphy].  PB: For epilepsy and psychiatric care?  LS: <Long answer that confirms you need a holistic approach>.

11.54  PB: We’ve heard a distinction drawn between observations and checks for behaviour and Connor’s risk of seizures.  We know on 3/6 a decision was taken to reduce the level of observations and Dr Murphy says she meant for behaviour reasons.  Was that a distinction that shd have been made?  LS: Not in my view and it’s not supported by our @Southern_NHSFT policy.  LS confirms that decisions should be made by a holistic assessment of Connor’s needs with an overall risk assessment for all needs.

11.56  PB: CQC found record keeping very poorly done in STATT and issued an enforcement notice about it?  LS: Yes.  PB: We’ve heard about problems with RiO from staff… it didn’t allow them to capture information LS: Mmmm, uh hmmm [agreement].  PB: This contributed to confusion, is that fair at the time?  LS: We’ve heard they were struggling and certainly today an NHS system without electronic records wld be unthinkable, the benefits of RiO and electronic records are significant and we’ve a responsibility to use them.  PB: At the time were staff struggling to such an extent to not be able to use and communicate information between them?  LS: There were clear challenges but I’m not convinced they’re to do with RiO.  PB: Not to do, but was there adequate training? It’s not the system to blame so much as failure of staff to use it?  LS: It was patchy.  It could have absolutely been better; what I’ve not seen is everything was terrible, we’ve seen some examples of very good recording.

12.00  PB: I’m going to ask you about resourcing and staffing issues.  LS: Yes.  PB: We’ve heard of changes in shift patterns?  LS: Was before @Southern_NHSFT took over.  PB: Immediately?  LS: During due diligence period.  PB: We’ve heard about poverty of interactions with patients, long shifts must have had an effect on staff who were struggling?  LS: My experience of long shifts is mixed… handovers can be done in a number of ways.  There were opportunities to make sure communication across shifts was better, that weren’t taken.  PB: Just because it’s a long shift, your point is that nurses don’t not have time to observe patients in baths?  LS: Absolutely.

12.03  PB: Staffing was cut so one Band 7 and Band 6 in each unit, so effectively the management of nursing teams was cut in half?  LS: That’s true.  PB: That wouldn’t have had impact?  LS: [Has] taken advice from Nursing Director and considers staffing levels were safe.  LS tells jury how much pressure the NHS is under; considers other staff available to the unit and ‘there were plenty of staff there’.

12.06  PB: How do you explain poverty of interaction in STATT found by CQC if not due to tech changes, shift changes or staffing?  What was problem?  LS: I’ve heard LB had some good interactions with staff so there was an issue of consistency.. we’ve heard about personality clashes in team.  PB agrees LB had some very good engagements with some staff.

12.13  LS agrees that LB should never have been left in the bath for 15 mins, irrespective of whether a seizure occurred in March.  PB: Did staff understand and consider LB’s epilepsy?  LS: No, I don’t believe so.

12.14  AS confirms below Band 6 and 7 level staffing wouldn’t have made difference?  LS: Yes.  AS: the implication therefore is that there was impact from Band 6 and Band 7?  LS: That wasn’t my intention.  AS: So it’s a coincidence we lose these posts and have this bad performance afterwards?  LS: Well, we make savings where we have to make them.  AS: To be clear there is no issue with staffing at Band 6 and 7?  LS: Yes.

12.16  AS: So LB should have been in line of sight or sound observations when bathing?  LS: Yes, line of sight or sound.  AS: There have been variations in what staff have said about observations?  LS: Yes.  AS: So we have nurses and doctors with over 100 yrs experience who have difficulty agreeing what observations should be?  LS: I don’t think you included Dr Jayawant’s evidence which was the same as mine – sight or sound.  AS: So amongst this confusion risk assessment becomes more important?  LS: Yes.  AS: Band 5 nurses shd be aware of the NICE guidance?  LS: My expectation is that all professional staff should be aware of them.

12.23  AS takes @StevensLesley to the @Southern_NHSFT Epilepsy Toolkit.  LS confirms she wouldn’t expect all Band 5 nurses to know all NICE guidelines but she wld expect them to know how to find them.  LS: The epilepsy toolkit was developed in Hampshire services where considerable expertise in epilepsy and epilepsy delivery.  LS: The Rio risk assessment tool itself is set out as a table to provide a structured risk assessment.  AS: This risk assessment table is provided to help staff with less resource to conduct assessment?  You have to accept is inconsistency between saying this document is not needed and then providing it in the end?  LS: Our view after LB died is that we needed to significantly up-skill staff in relation to epilepsy.  AS: Knowing what you know now, do you have sympathy for the staff who had to work in STATT?  LS: I don’t understand that question.  AS: Dr Murphy describes it as chaotic.  LS: I’m not sure I understand.  AS: There comes a point when it can’t be all about individuals because all those individuals can’t be failing individually.  LS: Professionals are responsible for their own conduct and how they interact as a team.

12.29  OW wishes to clarify what his client, Dr Jayawant said about difficulties accessing RiO – we will return to that once he’s liaised with PB.

12.31  Fiona Paterson can’t question @StevensLesley now, she wishes to take instructions from @Southern_NHSFT so we break for lunch.  Back at 13:30